Setting up VS Code for OCaml development

Steps on how to configure VSCode for OCaml development

Having thoroughly enjoyed delving into ReasonML recently I was curious to learn more about OCaml itself. For those of you unaware ReasonML is a alternative syntax for OCaml. The main motivation has been to develop front-end web applications with OCaml semantics in a syntax reminiscent of Javascript (and ultimately compiling to Javascript using the Bucklescript toolchain).

I have been developing a side-project in OCaml in VSCode and wanted to share my experience on this.

First step is to install the OCaml compiler itself. If you already have OCaml and an existing project you can skip this step.

Instuctions are detailed on the OCaml site. Follow the instructions for your environment.

I am using Windows (specifically WSL) so I follow the Ubuntu instructions:

We will also need OPAM which is a package manager for OCaml. We will need to use this to install Merlin and Ocpindent later

Instructions can be found here for v1 and here for v2. OPAM will soon be making the switch to 2.0.0. The rest of the article assumes OPAM v2.0.0.

We need to initialize OPAM globally (you will be prompted, I accepted the defaults)

Or if you are using WSL which does not yet support sandboxing (it will complain about a missing bubblewrap dependency) you can instead run the following to disable.

This will download and recompile any dependencies with the above compiler version. If any fail you may have missing system dependencies. Myself, when running this, I was missing m4 - this was easily fixed by installing via the OS package manager (in my case apt-get).

Merlin provides services such as autocompletion to IDEs such as VSCode

Merlin will be aware of any third party libraries installed via OPAM from its .merlin file. See the Merlin documentation on how to configure this. Build tools such as Dune will typically manage this for you.

Ocp-indent is a tool for auto-formatting OCaml code

Out-of-the box defaults work fine for me but can be configured further. See ocp-indent's documentation on configuration options.

If you are using ReasonML in parallel I strongly suggest following the extension's suggested config options in Code > Preferences > Settings. If using WSL this looks like:

As OPAM 2.0.0 installs libraries within the project directory (./_opam) and the .merlin file needs to know about these to provide autocompletion for third party libraries I configured the below Workspace settings (Ctrl+P > Workspace Settings) for each of my OCaml projects

You should now have autocompletion, mouse-over type definitions and codelens enabled for .ml and .mli files in your project. 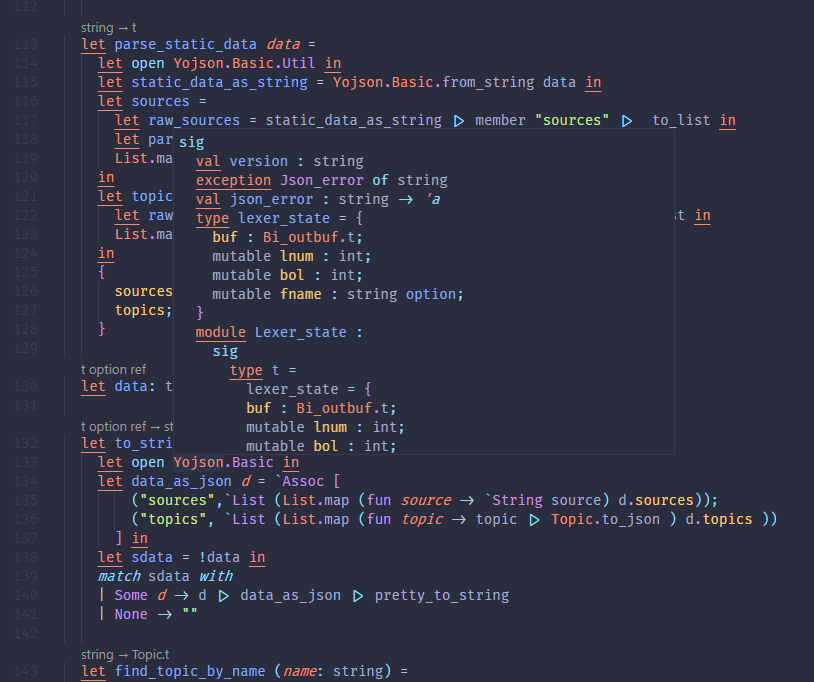 Check the following if you are still not seeing the expected IDE functionality (eg mouse-over definitions, autocompletion):

Web development enthusiast with a keen interest in anything frontend.